Today we all wear a necker of red, yellow and blue to show we belong to Wellesbourne because when Akela Sarah restarted the Cub pack in 2008 she had taken her inspiration from the Wellesbourne flag. But how did those colours come to represent Wellesbourne? 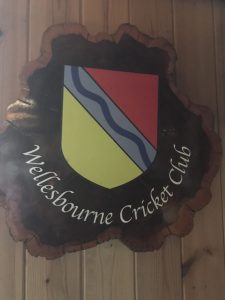 The visual clue lies in another local establishment, the Wellesbourne Cricket Club, which dates back to the turn of the 19th Century. Their shield gives us the clue. Wellesbourne was once two villages – Wellesbourne Mountford and Wellesbourne Hastings, the two villages being divided by the River Dene; the former lying to the south of the river, and the latter to the north. In 1947 the two parishes were merged, and are now considered to be a single village.

So which side of the river does your family live? Whether you are from the north or the south side, we are all one Wellesbourne and that  is what the colours of your necker represent. Now you know!

This website uses cookies to improve your experience while you navigate through the website. Out of these cookies, the cookies that are categorized as necessary are stored on your browser as they are essential for the working of basic functionalities of the website. We also use third-party cookies that help us analyze and understand how you use this website. These cookies will be stored in your browser only with your consent. You also have the option to opt-out of these cookies. But opting out of some of these cookies may have an effect on your browsing experience.
Necessary Always Enabled
Necessary cookies are absolutely essential for the website to function properly. This category only includes cookies that ensures basic functionalities and security features of the website. These cookies do not store any personal information.
Non-necessary
Any cookies that may not be particularly necessary for the website to function and is used specifically to collect user personal data via analytics, ads, other embedded contents are termed as non-necessary cookies. It is mandatory to procure user consent prior to running these cookies on your website.
SAVE & ACCEPT
Posting....